A Brief History of Shrimp and Grits

Spring has sprung and summer is fast approaching. If you’re like us, you’re craving a taste of the beach, and in the American South, that means one thing: Shrimp and Grits! It’s a regional favorite, and a house speciality, which is why we’re digging in to find out more.

Shrimp and grits are a traditional staple in great Southern coastal cuisine. Similar to polenta, grits are a rich and creamy ground corn porridge first introduced by Native Americans in the 1500s. Today, they’ve been transformed into a popular dish seen on menus nationwide. The true origin of shrimp and grits is believed to be Charleston, South Carolina, where the recipe first appeared in 1950 as a breakfast recipe in the Charleston Receipts cookbook. By 1976, the meal was so popular South Carolina declared shrimp and grits the official state food.

There are many iterations, like the addition of cajun spices, rich gravies, and fire-roasted vegetables, but the essence of the dish remains the same. Finely-ground corn grits are boiled in milk and butter until thick and creamy, then topped with quick-seared, flavorful coastal shrimp. While this delightful combination originated as a breakfast dish, it’s a popular option for lunch, brunch, and dinner throughout the South.

McCray’s Tavern takes shrimp and grits to the next level. Plump, South Georgia Brunswick shrimp are pulled from our beautiful coastal waters and flown fresh to our door, never frozen. In the kitchen, we season them with our own mix of proprietary spices and grill them to perfect tenderness before piling them atop a bowl of delicious popcorn grits. Popcorn grits? Oh yes, indeed! Our creamy and delicate South Carolina stone-ground grits take on robust flavor and a delightfully fluffy texture with the addition of real popcorn. It’s a must-try!

The beach may be a little ways off, but the true taste of our Southern coasts lives on in the food. McCray’s Tavern is serving up our world-famous popcorn shrimp and grits every day. Featuring modern recipes and only the finest, freshest ingredients, we’re a local destination in East Cobb. We deliver top-notch service and offer the best bar program in town! You’ll find a wide selection of local, craft, and import beers, plus fine wines and stiff spirits, and an inventive menu of artfully crafted cocktails.

We’re open throughout the week for lunch and dinner, and we’re serving up mouth-watering brunch in Marietta all weekend long! Join us on the patio or grab a seat inside, and dig in! 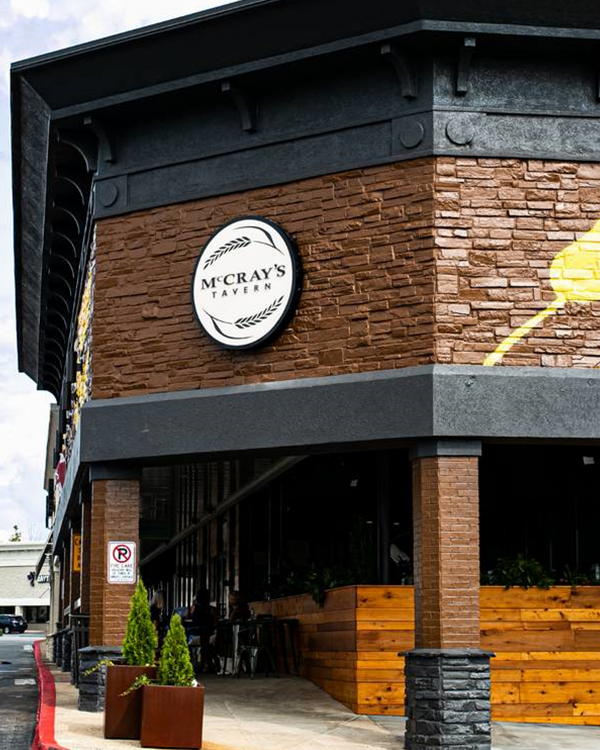